I don’t think I feel things the same way you do.”

I don’t think I feel things the same way you do.”

The concept of the psychopath is only the latest and most refined in a long string of attempts to account for a certain pattern of conduct. In the 19th century, psychiatric clinicians began to notice patients in their care who fit no known diagnosis, but who nevertheless displayed strange and disturbing behaviors. They were impulsive and self-destructive. They had no regard for the feelings and welfare of others. They lied pathologically, and when caught, they shrugged it off with a smirk and moved on to the next lie. It was a puzzle—because while there was clearly something unusual about these patients, they showed none of the psychotic symptoms or defects in reason thought necessary for mental illness at the time. Indeed, apart from a tendency to follow foolish and irresponsible impulses that sometimes got them into trouble, they were coldly rational—more rational, perhaps, than the average citizen. Their condition therefore came to be referred to as manie sans délire (“insanity without delirium”), a term which later evolved into moral insanity once the central role of a “defective conscience” came to be appreciated. By the 20th century, these individuals would be called sociopaths or said to suffer from antisocial personality disorder, two terms that are still used interchangeably with psychopathy in some circles, while in others are considered distinct but related conditions.

The psychopath does not merely repress feelings of anxiety and guilt or fail to experience them appropriately; instead, he or she lacks a fundamental understanding of what these things are. When asked a question such as “What does remorse feel like?” for instance, the typical psychopath will become irritated, deflect the question, or attempt to change the subject

apparent success many psychopaths find within society. The majority of these individuals are not violent criminals; indeed, those that turn to crime are generally considered “unsuccessful psychopaths” due to their failure to blend into society. Those who do succeed can do so spectacularly. For instance, while it may sound like a cynical joke, it’s a fact that psychopaths have a clear advantage in fields such as law, business, and politics. They have higher IQs on average than the general population. They take risks and aren’t fazed by failures. They know how to charm and manipulate. They’re ruthless. It could even be argued that the criteria used by corporations to find effective managers actually select specifically for psychopathic traits: characteristics such as charisma, self-centeredness, confidence, and dominance are highly correlated with the psychopathic personality, yet also highly sought after in potential leaders.

In romantic relationships, a psychopath may be charming and affectionate just long enough to establish intimacy with a partner, and then suddenly become abusive, unfaithful, and manipulative. The bewildered partner might turn to friends and family with their story, only to be met with disbelief—how could the warm, outgoing individual everyone has come to know possibly be guilty of these acts? All too often, the abused partner blames the situation on themselves, and comes out of the relationship emotionally destroyed.

In social circles, psychopaths are often the most popular friends among members of both sexes.

And strikingly, in entertainment media such as films and books, it’s not just the villains who tend to have psychopathic personalities—it’s the heroes, too.
One doesn’t have to look far to find examples of this kind of protagonist. James Bond, the promiscuous, daring secret agent who can ski down a mountainside while being chased by armed attackers without breaking a sweat, is a textbook case.

The reasons we look up to these conscience impaired people are unclear. Recent Bond film Casino Royale didn't shy away from acknowledging Bond's psychopathic tendenciesMost likely it has something to do with the confidence they exude, the ease they seem to feel in any situation—a trait that comes easily in someone essentially incapable of fear or anxiety. Maybe we’re easily suckered in by their natural glibness and charm. Or maybe on some level we envy the freedom they have, with no burden of conscience or emotion. 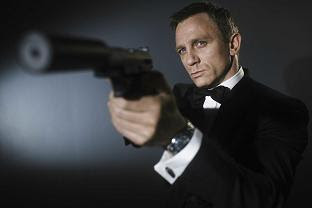