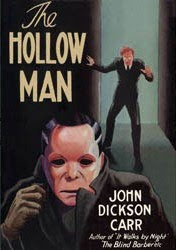 The Hollow Man is a famous locked room mystery novel by the American writer John Dickson Carr (1906-1977), published in 1935. It was published in the USA under the title The Three Coffins, and in 1981 was selected as the best locked-room mystery of all time by a panel of 17 mystery authors and reviewers

Plot summary
One wintry night in London, two murders are committed in quick succession. In both cases, the murderer has seemingly vanished into thin air.
In the first case, he has disappeared from Professor Grimaud's study after shooting the professor -- without leaving a trace, with the only door to the room locked from the inside, and with people present in the hall outside the room. Both the ground below the window and the roof above it are covered with unbroken snow.
In the second case, a man walking in the middle of a deserted cul-de-sac at about the same time is evidently shot at close range, with the same revolver that killed Grimaud and only minutes afterward, but there is no one else near the man; this is witnessed from some distance by three passersby -- two tourists and a police constable -- who happen to be walking on the pavement. It takes Dr Gideon Fell, scholar and "a pompous pain in the neck," who keeps hinting at the solution without giving it away,